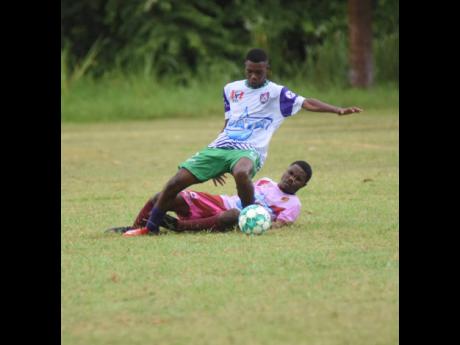 William Knibb’s Kernell Peart (standing) is tackled by Spot Valley High’s Khalid Stephenson during their ISSA/Digicel daCosta Cup match at William Knibb in their first clash of the season, recently. William Knibb won 3-0 as they also did yesterday in the second encounter at Spot Valley.

Dwight Jeremiah, coach of William Knibb Memorial High, believes that while they are grateful for yesterday's 3-0 away win over Spot Valley High in the Inter-Secondary Schools Sports Association (ISSA) daCosta Cup football competition, their focus is on the tight Zone C schedule of games in the coming days.

"We have four games in 10 days and if we should look even closer we have three games in five days. It's going to be difficult but that is why we have a squad. We will have to rotate and see what the squad players are made of," said Jeremiah.

Jeremiah is looking for improved performance when they take on Cedric Titus in the much anticipated back-to-back games next week and wanted more from his players in yesterday's match.

"I think the result was better than the performance although the condition was not suited to our style of play. The boys took a little too long to adjust to what we wanted to do but when they did, we were effective. We probably gave them a bit too much of a look-in but we didn't concede which is good and I have to commend the boys," said.

William Knibb took the lead through Omarion Robb in the 14th minute. The visitors doubled their lead on the stroke of half-time when lethal striker Mark Lewis got away from his marker to latch on to a cross into the box from a free kick and hammered the ball into the net.

William Knibb took their foot off the gas after the interval, but the game would not finish without prolific central defender Tajay Cooper getting on the scorecard.

Towering over the Spot Valley defender with a perfectly timed jump in the 81st minute, he bagged his fifth goal of the season.

Coach of Spot Valley, Waldy Williams, said while it had been a disappointing campaign for them he is hoping the boys continue to see football as their way to a better future.

"It was a tough season for us even though we worked hard in many of the games. We just have to finish the season and look ahead to next year. We have about four players leaving but it's a talented squad that we have to work with," Williams said.

"We have to keep the programme going because many of these players are coming from tough backgrounds. We are working hard with them because football means so much to them.

"I want them to see football as their way out. We have two teams from Montego Bay in the Jamaica Premier League and I would want to see some of them in those set-ups if even at the Under-21s," he said.