Calculus for Mark My Word Trophy 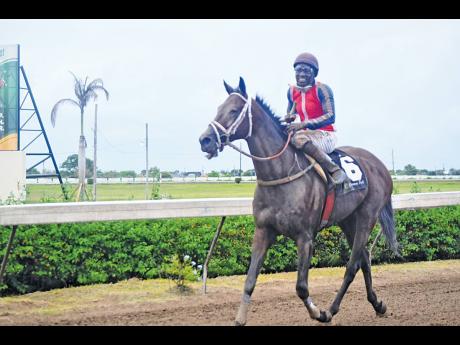 CALCULUS, ridden by Shane Ellis, strides to the winner’s enclosure after winning the Menudo Trophy over 10 furlongs at Caymanas Park recently.

CALCULUS couldn't have asked for a better set-up as he aims at a third route victory in a month - a bunch of speedsters to wear themselves out in Saturday's Mark My Word Trophy at nine furlongs and 25 yards.

From BIG JULE to MONEY MONSTER, in some shape or form, CALCULUS' five rivals all love to run one way, on the lead, which will be music to Shane Ellis' ear aboard last year's Jamaica Derby and St Leger winner.

CALCULUS aside, the form horse in the event is Dale Murphy's RUNAWAY ALGO, who destroyed overnight-allowance company at seven and a half furlongs two Saturdays ago. The speedy United States-bred three-year-old colt, however, had things his way against slower rivals, dropping from grade one after placing in back-to-back races against the country's top handicappers.

It was truly an awesome performance. Fast track or not, an added second for the friendly surface works out to 1:31.4, putting the speedster in grade one, exactly where he belongs, better than getting a bye from the condition book to trample inferior rivals.

Christopher Mamdeen will try using RUNAWAY ALGO's terrifying speed to slip CALCULUS, his only danger from off the pace, however, SHE'S A WONDER and MAKE UP ARTIST, reporting at 115lb and 114lb, respectively, should foil the foreigner's game plan.

CALCULUS finished ahead of RUNAWAY ALGO in their only meeting, seven furlongs on July 30, failing by a half-length to tag KING ARTHUR, who got first run on a collapsing pace and held on with his 11lb advantage.

Though he was awesome in victory at seven and a half furlongs, eased close home, RUNAWAY ALGO's pursuers were AMY THE BUTCHER and DUNROBIN before ONEOFAKIND, reporting off a six-month break, picked up the chase.

RUNAWAY ALGO reports in CALCULUS' backyard with matching speed. MAKE UP ARTIST recently showed her pace, acting as rabbit for stablemate I AM FRED against MAHOGANY, sitting in splits of 22.0, 33.2 and 45.0, going six furlongs. SHE'S A WONDER will have her stablemate BIG JULE's interests to protect and should also ensure a hectic pace is maintained.