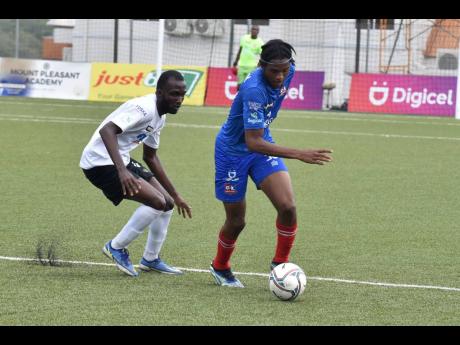 If all goes according to the plans of coaches Rudolph Speid of Cavalier and Harold Thomas of Dunbeholden, today's Jamaica Premier League (JPL) second leg semi-final between the teams at Sabina Park at 7:30 p.m. should serve up an exciting contest.

Dunbeholden lead Cavalier 1-0 from Sunday's first leg and Speid, head coach of the defending champions, said the intention is to attack in a bid to erase the deficit.

Despite Dunbeholden's advantage, Thomas said his team has always played attacking football and today will be no different.

Speid said that while they will be on the attack early the team will be taking a calculated approach and try to slowly work their way back into the tie.

"They will defend and we will attack. We will have to get that one first to get back in the game. A little bit of fatigue has started to set in because of the amount of games. We will have to freshen up the squad but it is not out of sight as yet, it is just 1-0 so we still have everything to play," Speid said.

Meanwhile, Thomas pointed out that even if Cavalier dominate possession they will be seeking to use every opportunity to go forward. He also said they must be mentally ready for the task at hand.

"The approach is to play to win. We play an attacking game. We are never a defensive team. Even when we are under pressure we try to create counter-attacking moments. So we never think of defensive football.

"We got caught in some problems (first leg) that were not football issues. The red card was not a football issue.. So it must be the mentality. But we will get over the line," he said.

In the opening semi-final at 5 p.m., Harbour View will try to see off last season's finalists Waterhouse. They lead from the first leg.

Harbour View's coach Ludlow Bernard is confident of seeing off his rivals.

"We have been showing consistency and I am pretty confident based on their (players) confidence that they can get the job done," he said.

Waterhouse assistant director Daniel Bent is hoping his players can show quality and resolve to turn it around.

"Waterhouse are a quality team all around, so we are looking to turn it around and get into the final," he said.