Parchment, McLeod face off in Birmingham 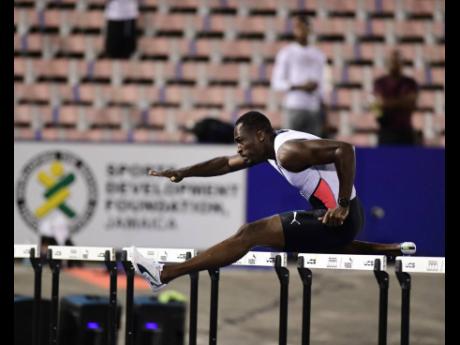 Champion sprint hurdlers Hansle Parchment and Omar McLeod will face each other for the first time this season at the Birmingham leg of the Diamond League on Friday.

Parchment has a season's best of 13.15 seconds, which he set at the Puerto Rico International Classic on May 12 en route to victory and has won his last three races so far this season. Parchment said after his win in Puerto Rico that while pleased with the result, there were still technical details he had to work on to improve.

"So many things to fix," he said. "I'm sure coach is already getting his little book ready with all the things I need to work on. Otherwise, I had fun."

McLeod's last race was at the Penn Relays in April where he finished second in a time of 13.22. Parchment and McLeod have the third and fifth fastest times in the world this season. Parchment finished third in the Diamond League final last season with his national teammate, Olympic bronze medallist Ronald Levy, finished second.

In the women's 100m, Olympic bronze medallist Shericka Jackson will face reigning 200m World champion Dina Asher-Smith and Olympic 200m silver medallist Gabby Thomas of the United States. Thomas bested Jackson in the 200m in the season opener in Doha last week, where Jackson opened her 200m campaign. This will be Jackson's first 100m race outside of Jamaica, having competed at the Jubilee Series on May 7. The event will be without double Olympic sprint champion Elaine Thompson Herah, who had to pull out of the meet as a precaution, citing discomfort experienced in training.

Former World 100m champion Yohan Blake will face stiff opposition in the men's 100m as he goes against Olympic 200m champion Andre De Grasse of Canada, and 2015 World championship bronze medallist Trayvon Bromell of the United States. Blake also participated in the Puerto Rico Classic, clocking 10.29 in his 100m heat but did not start the final.

Olympic 4x400m relay bronze medallist Janieve Russell, and Ronda Whyte will compete in the Women's 400m hurdles. Russell is coming off a victory in the Puerto Rico Classic, clocking a season's best of 54.09. Both will be facing multiple-times World and Olympic champion Dalilah Muhammad of the United States, who will be competing in her second 400m hurdles race of the season. Her first was on April 30, where she won in a time of 53.88.