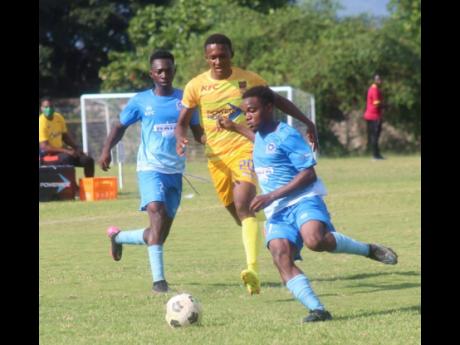 Maggotty were steadfast in defence throughout the first half as B.B. Coke played their usual style of using the width of the field to spread their passes.

The Junction-based B.B. Coke increased their attacks after the half-time break but were denied the lead by two outstanding saves from Green. Against the run of play, Robinho Bennett then backed up his goalkeeper's effort with a 58th-minute strike to give Maggotty the lead.

Overturning the deficit was made difficult for B.B. Coke when they lost their main playmaker Danyea Whitely to injury. They, however, continued to push for at least an equaliser but Green kept them out with confident goalkeeping to give his team all three points.

Green, who gave himself 10 out of 10 for his performance between the sticks, said he was happy he could have contributed to the victory and hoped they can take the confidence into their next game.

"I am happy I was able to help my team get the win. Our execution was perfect, we planned for the three points from overnight. We planned to lock down their key players (number 7 Maliek Chang) and Whiteley, the number 10, and use the flanks in our attacks and it worked for us. We held our composure after we scored and got all three points so we are happy," Green said.

"After today's performance, we are even more confident about getting out of the group. We have our last game of the initial group games on Saturday against Lacovia and will be going for all three points," he added.

Kemar Ricketts, coach of B.B. Coke, said while they are disappointed with the loss they are confident they will get things right going forward.

"We had some below-par performances in certain parts of the pitch. Maggotty came with a clear plan to sit behind the football, being compact and they executed that well," Ricketts said.

"We are still in it. What we need to do now is to play our next game like it's a final, get three points and move forward," he added.