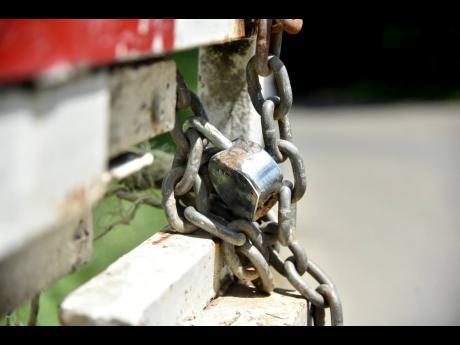 The two men who were captured in a video breaching floodgates at the Bog Walk Gorge in St Catherine, argue that they had no other alternative route to reach their home.

Alexander Shaw, the lawyer for the two men said his clients will argue 'self-help' in their defence against charges brought against them.

They are to return to court on November 9.

Bus operator Garth Brown, 52 and Glenroy Denton, 45, are facing charges of malicious destruction, breach of Disaster Risk Management Act, conspiracy to destroy Government property and accessory before and after the fact.

Reports are that the National Works Agency (NWA) ordered the closure of the Dam Head floodgate on September 26, due to flooding in the gorge from the Rio Cobre.

Denton and Brown were subsequently seen breaking the padlock on the floodgate and travelling along the roadway.  Both were later arrested and charged.

When they appeared in the court today, Parish Judge Tracey-Ann Johnson extended their bail after the November mention date was scheduled.

The defence and the prosecution are to have discussions on how they'll be proceeding. The judge also ordered that disclosure be done by October 28.

Shaw said his clients had no other alternative route to reach their home and had made numerous efforts to contact the NWA.

Shaw also emphasised that Brown was in a hurry to reach home as his children were sick and in need of care.