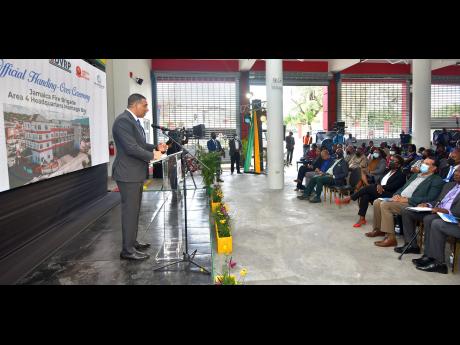 Some $200 million has been allocated to improve the road conditions in Montego Bay, St James, to help ease traffic congestion in the Second City.

Prime Minister Andrew Holness made the disclosure at the recently held handover ceremony for the Area Four headquarters of the Jamaica Fire Brigade, situated on Barnett Street, in Montego Bay, St James.

Mr Holness said the roads to be repaired will serve as alternative routes to bypass the usually congested town of Montego Bay.

The targeted thoroughfares include the Westgate main road, Mount Salem to Catherine Mount and Providence to Norwood.

Mr Holness said the scope of work will entail improving intersections, “by widening and putting in the proper signalling, resurfacing the roads, and putting in various sensors where necessary”.

The Prime Minister informed that the allocation is a temporary fix to the condition of the roads, noting that the key focus will be on the construction of the Montego Bay perimeter road.

According to Mr Holness, with the continued growth of the resort town, it has become necessary to improve traffic management, as the Government explores expanding the Second City in the long term.

“We really have to look at expanding the city and how we provide mass transport for the city. So, the Government has already made the provision, and it is already under way for the perimeter road. It is now at this stage where they are doing the negotiations for the various bonds to put in place for the contracts to be operable. In the interim, the Government has allocated $200 million to improve the quality of local roads,” he said.

“We're doing a comprehensive programme for Montego Bay, including drainage, which we have seen is critical, because it appears that you now have a two-year cycle of heavy rainfall, which causes flooding, and that can only be solved by putting in place paved drainage that is properly designed to take the water off the many roads and rooftops that are in the Montego Bay area,” the Prime Minister added.