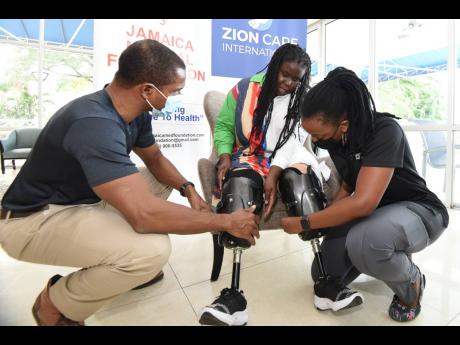 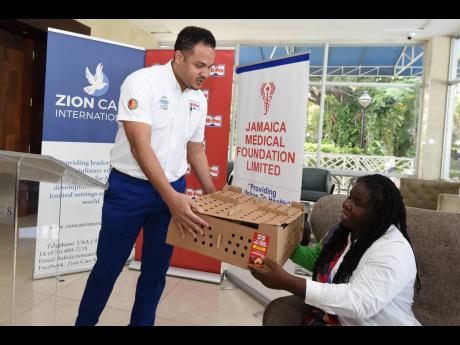 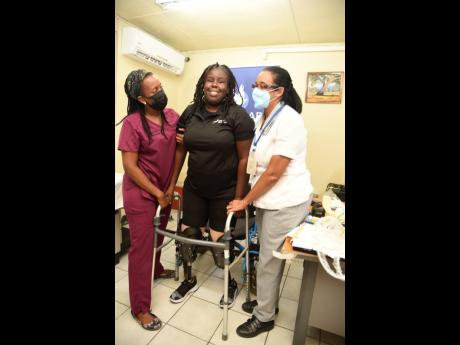 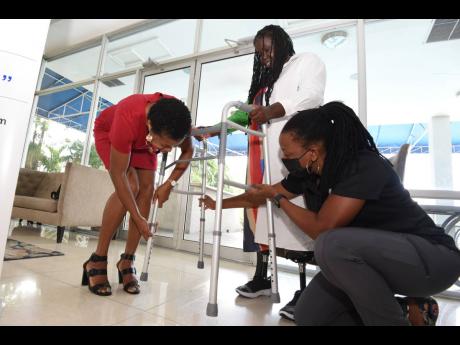 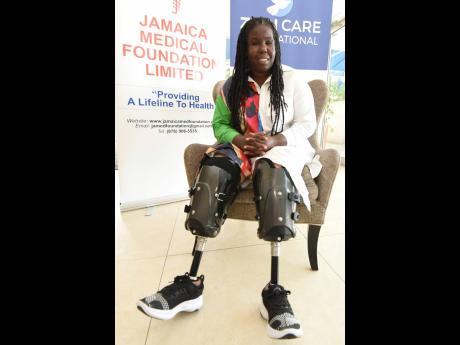 Cara Moore is overjoyed after she was gifted new prosthetic legs during a small handing over ceremony held at Pegasus Hotel last Friday.
1
2
3
4
5

As she stood on two legs for the first time in five years last Friday, Cara Moore's eyes lit up as she jokingly expressed her intention to seek Shenseea's endorsement as she was 'the real doll'.

"Mi feel like a dolly because mi foot dem can take off and put on back. Shenseea can find me and invest inna mi business because mi ago make her song [ Dolly] viral again. A mi a di real dolly, so I am going to create a TikTok page," she said, much to the amusement of those around her.

The 36-year-old, who lost both legs to diabetes in 2016 and 2020, respectively, was fitted with prosthetics legs courtesy of Zion Care International, IFit Prosthetics, Sir John Golding Rehabilitation Centre and Suzanne Watts of Stride Prosthetics. Watts, a certified prostethist from Barbados, volunteered hours of her time to ensure that the legs were fitted properly. Moore's story was first highlighted last September in this publication with the headline 'Cara Moore stands tall despite her disability'.

The mother of three, who hails from Yallahs, St Thomas, was seeking J$1.1 million to purchase prosthetic legs but at the time, had only raised $205, 000. Her only source of income came from raising chickens. However, she had lost 68 of the 100 chicken during Tropical Storm Ida last September.

The article caught the attention of Zion Care International director Camille Wilson, who said she was moved and had to offer assistance.

"We have been doing medical missions in Jamaica for almost 12 years and we have been working with the Sir John Golding Centre for quite a little while and they were willing to come on board after I told them about Cara's story, which I read in THE STAR. Suzanne came on board and flew in and volunteered her time. We are all happy to be a part of this," she said.

As Moore waited to have her legs fitted, her 11-year-old son Kiwanis Webb showered her with hugs and kisses. He told the news team that he was elated that his mother was regaining her independence. Moore was even happier and her smile grew wider when she took her first steps with Watts' help.

"I feel like getting up and run right now. I am a person of faith, so I just used prayers and win. I feel like a brand new person. I even feel taller. I am happy and really grateful for all of this. Thank you," she said.

Moore has a first degree in primary education from the College of Agriculture, Science and Education, but said she didn't get to spend much time in the classroom as she lost her first leg shortly after graduating. She hopes to live her dream.

"I would want to be in the classroom. These legs give me an opportunity to do so. I used to walk on my knees, so I will see what happens after I complete physiotherapy and get my life fully back on track," she said.