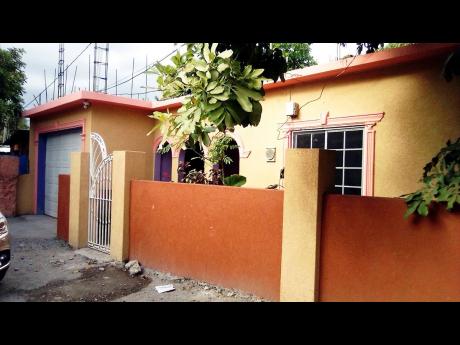 The Naggo Head, Portmore home of Sharon Ricketts in which she was gunned down last Friday.

As gun violence continues to be a feature of the Portmore municipality, assailants shot two persons last Friday, killing a 66-year-old vendor at her home in Naggo Head.

A man who was riding his bicycle along the road was also injured. The woman has been identified as Sharon Ricketts of Cassinor Drive. Reports from the St Catherine South police are that the gunmen attacked the cyclist and shot him several times, then opened fire at Ricketts' house hitting her. She was rushed to hospital where she was pronounced dead. The man was admitted for treatment.

Residents told THE STAR that they are living in fear and are disgusted with the ongoing violence in Naggo Head that is now claiming the lives of decent citizens. They say the root of the conflict originates from a gang feud that is fueled by warring overseas dons.

"It is a case of if you cant ketch Quaco you ketch him shut,'' said one resident. "The don dem up a foreign and all dem a do is send money to dem gang member down here to carry out hits on one another and because they can't get who they want, dem turn on innocent family members."

Residents described Ricketts, whom they affectionately called Dawn, as a good person who never had a quarrel with anyone in the community.