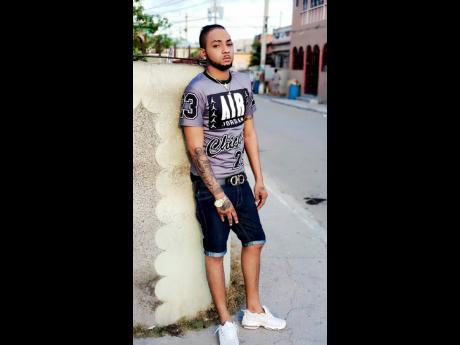 Recording artiste Don J1 says that he does not blame the police for searching his home after he uploaded a video in which he is deejaying while holding what persons thought was a firearm.

The entertainer spoke with THE STAR yesterday hours after he was released without charge. He said that the lawmen were merely doing their job and that the 'gun' was a prop.

"Mi can't wrong them none at all because that is how crime should be dealt with and if they consider a person to be a criminal, they should investigate. I am not a criminal and I was never convicted or had any run-ins with the law or anything," he said. The entertainer, whose given name is Javaughn Wedderburn, expressed alarm at the country's soaring crime rate.

"Honestly, I feel the Government a try the best it can but it's just that the youths dem who a do dem ting ya need to look in themselves and see that there is more to life than just going around and taking one," he said. Police statistics show that up to January 20, the island had recorded 93 murders, an 8.1 per cent increase over the corresponding period in 2021.

Don J1 said he was feeling emotional when he made the video last Tuesday. In it, a tearful Don J1 holds the instrument as he deejays, also displaying pictures of his daughters. He said a friend had rented the prop and loaned it to him.

"Mi start medz back everything mi go through inna life and mi start medz mi song name Three Points and I did a freestyle and it just went viral," he said. Don J1 said that he was at home in Seaview Gardens, St Andrew, on Saturday when police entered his dwelling and demanded that he hand over the firearm.

"I was frightened as hell and I was saying 'A wah dis now?'. When mi see dem walk in ... I whispered to my sister to go live because I was scared as they kept asking me where was the gun," he said. Don J1 said after his house was thoroughly searched, he was taken to a nearby police station.

"I had to call the person that own the prop and he came with it so the police had to see it to believe it was indeed a prop. They spent the night processing me and after seeing that I was clean, I was released," he said. Despite his ordeal, he said that he does not regret making the video as he was merely singing about protecting his life and those of his daughters.

Head of the police's Corporate Communications Unit Senior Superintendent, Stephanie Lindsay, said "If weapons or props are being used for photo shoots or videos, they [persons] should notify the police." However, she added that the police may not have had enough information to charge the entertainer.