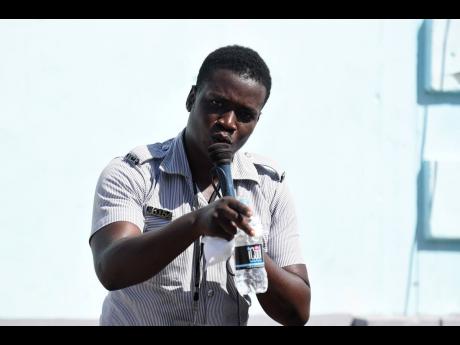 Constable Joel Robinson rebuked a man who interrupted him when he was preaching to a small gathering in Dunkirk, Kingston, last Saturday near the spot where four persons were shot, two fatally last Friday night.

The cop was emphasising that Jesus' blood was shed for all, when a man, presumably from the area, said "Every time unno come yah and talk but blood somebody dead." Robinson responded swiftly.

"I don't fear the devil when mi a work because the devil trembles in the name of Jesus. He is angry but I will pray for him today. I don't have anything against him because it is not him who is speaking but it is the enemy who is taking over his body," said Robinson.

He urged the people to pray and take back the community from the killers. Robinson's preaching came against the background of Friday's killings in the community, formally known as McIntyre Villa. According to the police, armed assailants opened gunfire at a wake killing 40-year-old Trevor Campbell and 22-year-old Tamika Harvey. Two injured persons remain in hospital. Residents say Harvey was an innocent bystander who was not the intended target of the attack.