Rashana Beckford was shot and injured after being caught in a crossfire between the police and a gunman on Saturday. 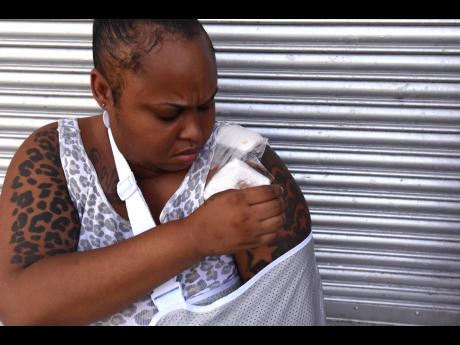 Rashana Beckford found herself speaking in tongues after the car in which she was travelling was caught up in the crossfire. 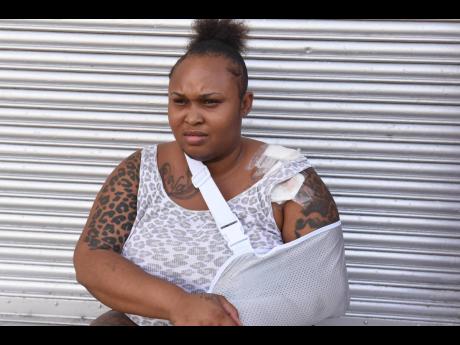 Beckford is contemplating legal action against the Government after the incident.
1
2
3

But as she came face-to-face with her mortality while seated in a car, having been caught in a crossfire between police and a fleeing gunman, Beckford found herself shouting in the 'language of the spirit'.

"Mi just start talk inna tongues, mi nuh know where that came from because mi cyah repeat it now. A years now mi nuh guh church now, and I am not a Christian, but mi feel like God did deh pon mi side," Beckford told THE STAR.

She was shot twice in the left shoulder during what she described as the most frightening experience in her life. The gun battle between the cops and the gunman took place along Lincoln Road in the east Kingston community. A 46-year-old deportee, Gilford Henry, engaged the lawmen after he allegedly murdered his 16-year-old grandniece, Sorika Picart, at their home. Henry escaped from the scene but was captured by the police on Monday.

Beckford, who was returning home from the hairdresser after dolling up for a party the following day, felt that her survival was due to divine intervention.

"Why? Because how di police dem shoot up the car and how the door shoot up on the left side where I was, a muss God deh pon mi side," she said.

The 26-year-old said the near-death experience has brought her closer to God.

"I don't even know what to say right now, all mi know mi need God cause if it wasn't for him, mi would a dead," she said.

Beckford, who was released from hospital on Monday, detailed the horrific seven minutes that she and her friend were subjected to as the bullets pierced through the vehicle and subsequently her skin.

"When we coming down we saw six police on bike. Two stopped in front of the car, and four came on the left side where I was sitting. As the car stopped, we start hear baay shot. Wi never know where the shots were coming from," she said.

"Mi keep saying 'mi dead now, mi dead now!' Mi start think bout how everybody a tell me say mi no fi go the party but mi did insist cause mi fren did a keep it."

"Mi feel something sting mi, so mi start look all bout the place a search mi body. When mi look to the left shoulder mi see the blood. Same time me say 'Mi get shot, mi get shot!'."

She said that Christopher Wright, the driver of the motor car, had to duck under the steering wheel to drive.

"Then the police did puncture the car so that mek mi even more scared. Dem say it was a crossfire but mi never see nobody a shoot after them at all because when mi turn on the road a just di six police mi see in the road," she said. Beckford said she learned of the incident with Sorika when she was on her way to hospital.

"Mi never know wah a tek place cause mi never have mi phone wid me. But afterwards when mi get shot now dem say a Candy get shot, which a never me, cause my pet name is Candy as well. Mi feel bad because everybody say mi dead and mi feel terrible. I don't know her but it make mi sad when mi hear about what happened to the little girl."

As she embarks on her road to recovery, Beckford is left to reflect on what could have been. She is even contemplating legal proceedings against the Government, as she is convinced that the bullets that hit her came from the cops' guns.

"Supposed the bullet weh inna mi hand go somewhere else, cause bullet do travel. Supposed it go touch an organ weh it no fi touch or shift to mi spine and cripple me? Mi cyah just go tek it so!" she said.